Jellyfish Lake Palau - The Jellyfish are coming back!

On October 7, 2018, we’ve posted “The Jellyfish are coming back!” on our Facebook page.

Ever since the Jellyfish disappeared we checked monthly if we could see some, with little to no result, until October 2018.

Since our Facebook report, it has been estimated by concerned conservation organizations and park rangers that the number of Jelly Fish has grown to over 1 million. 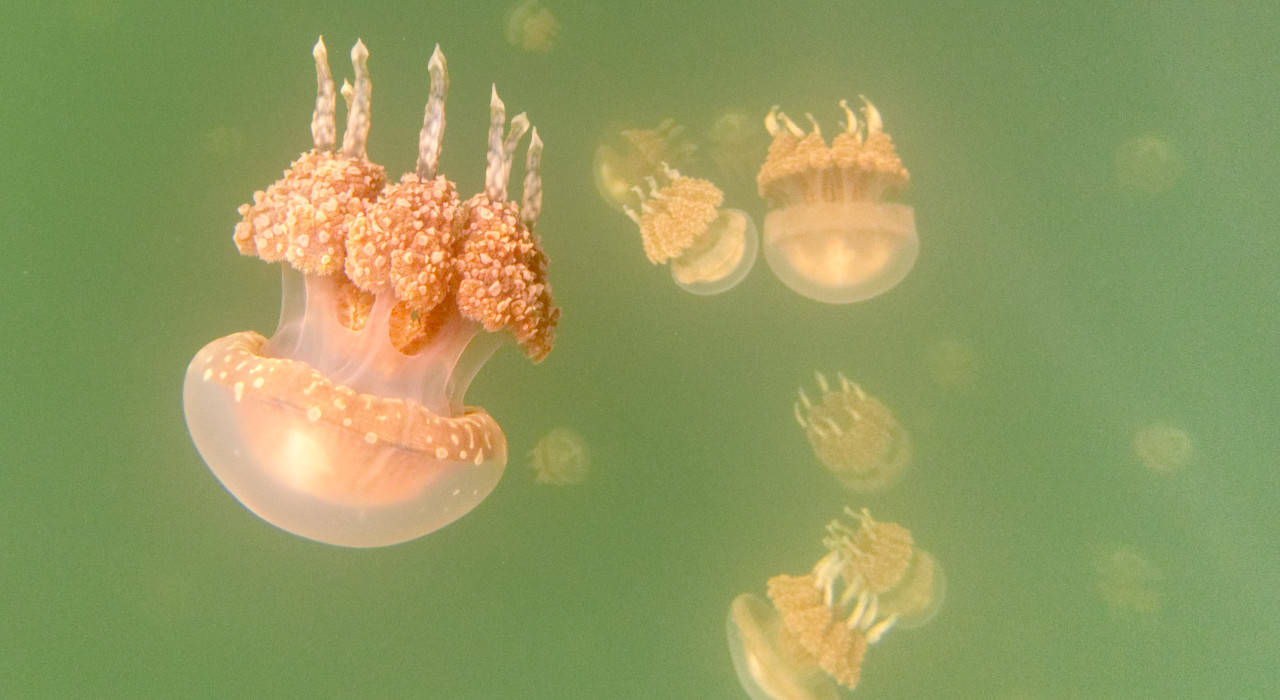 In 1982 National Geographic published an article about Palau’s Jellyfish Lake and since then its fame has been growing constantly.

Jellyfish Lake in Palau is one of seventy marine lakes in Palau. The marine lakes are connected to ocean water through fissures and tunnels in the limestone structure of the rock islands. Five of the marine lakes have a continuous population of the Golden Jellyfish (Mastigias cf. Papua etpisoni). There are five endemic subspecies of Jellyfish in Palau all named after Palau’s first five presidents.

The famous Jellyfish Lake is the only lake open to the public due to conservation reasons. The lake is called Ongeim’l Tketau (in Palauan Fifth Lake) and located on Eil Malk island, part of the Rock Islands in the southern lagoon in Koror State, roughly 45 minutes by boat from Koror. 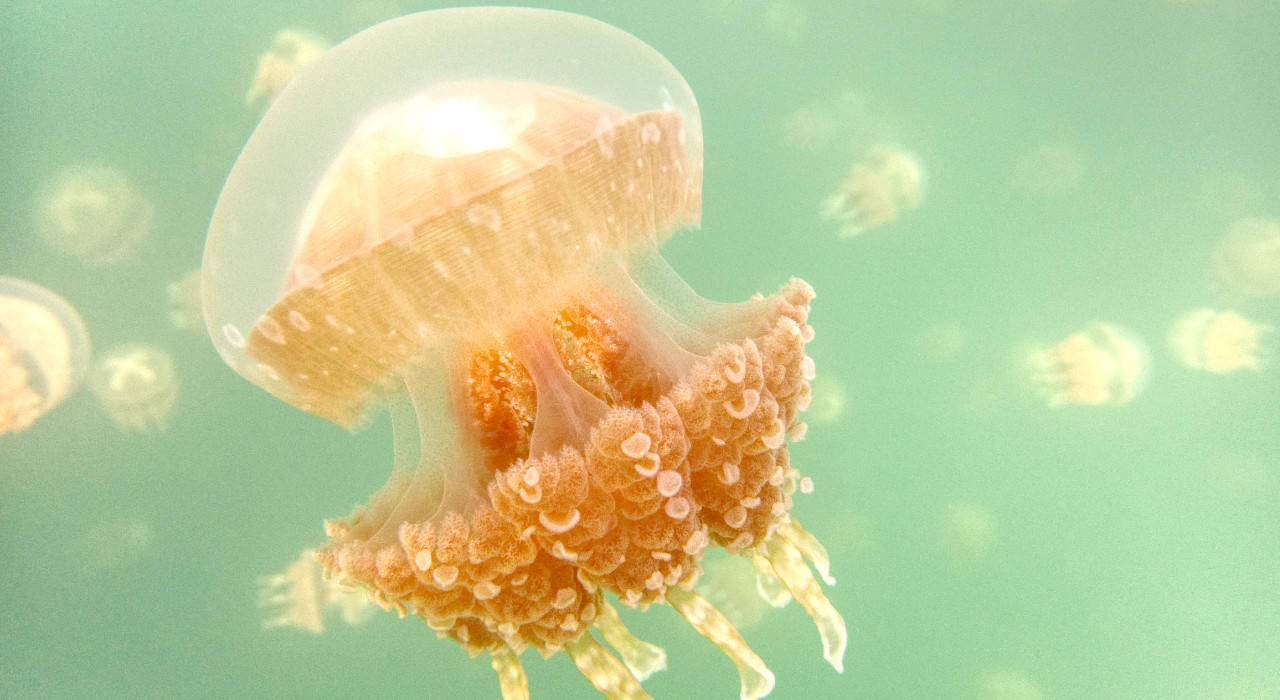 Due to isolation over about 12,000 years, the marine life in the lakes evolved to be different from species in lagoon and ocean. The jellyfish almost lost their ability to sting and they have no natural predators. Though the jellyfish do have stingers, they are too small to be felt by humans. However, at Fish ’n Fins, we recommend that people with allergies wear wetsuits while snorkeling. 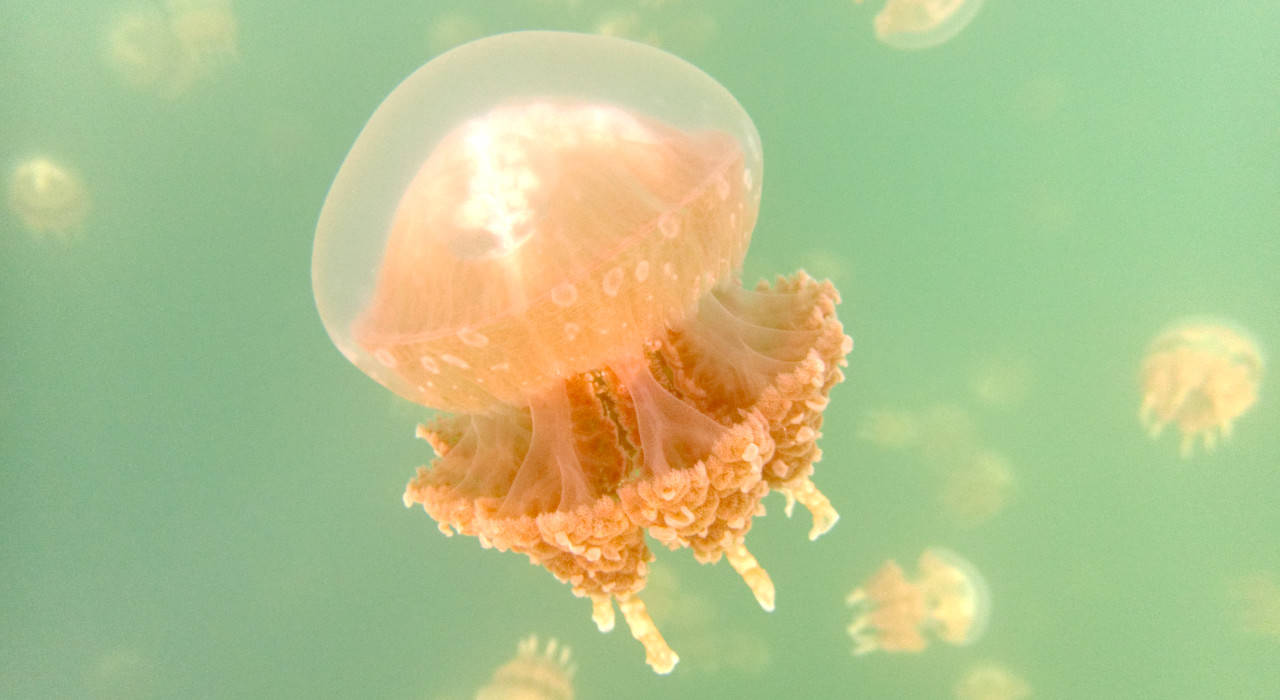 Jellyfish Lake is stratified (stratification = the formation of water layers based on salinity and temperature) into two layers, an oxygenated upper layer (mixolimnion) and a lower anoxic layer (monimolimnion). The oxygen concentration in the lake declines from the surface to zero at 15 meters (at the chemocline).

Stratification is persistent and seasonal mixing does not occur. The lake is one of about 200 saline meromictic lakes that have been identified in the world. However, most of these lakes are of freshwater origin. Permanently stratified marine lakes are unusual, but on Eil Malk and on other nearby islands there are eleven other apparently permanent stratified marine lakes.

The stratification of the lake is caused by conditions that prevent or restrict the mixing of water vertically. These conditions include:

The lake is surrounded by rock walls and trees which substantially block the wind flow across the lake that would cause mixing.

The primary water sources for the lake (rain, runoff, and tidal flow through tunnels) are all close to the surface.

The lake is in the tropics where seasonal temperature variation is small, and so the temperature inversion that can cause vertical mixing of lakes in temperate zones does not occur.

The oxygenated layer extends from the surface to about 15 meters (49 ft). All organisms that require oxygen live in this layer including the jellyfish, a few species of fish, and planktonic life forms.

The lake is connected to the sea via three tunnels that lie near the surface.

The tunnels channel tidal water in and out of the lake. Because the tidal water enters at the surface, the lower anoxic layer is largely unaffected by tidal flows. The anoxic layer extends from about 15 meters (49 ft) below the surface to the bottom of the lake. The oxygen concentration in this layer is zero. This layer, however, is rich in hydrogen sulfide, ammonia, and phosphate. The top three meters of this layer contains a dense population of bacteria, at least one species of which is a purple photosynthetic sulfur bacterium. This bacterial layer absorbs all sunlight so that the anoxic layer below the bacterial plate is dark but transparent.

The anoxic layer is potentially dangerous for divers, who can be poisoned through their skin.

The spotted jelly (Mastigias Papua), lagoon jelly, golden medusa, or Papuan jellyfish, is a species of jellyfish from the Indo-Pacific oceans. Like corals, sea anemones, and other sea jellies, it belongs to the phylum Cnidaria. They have a lifespan of approximately 4 months and are active primarily in mid-summer to early autumn.

Jellyfishes with stinging tentacles are usually hunters. Cnidocyte cells enable them to catch their prey before eating them. The spotted jelly has developed another way to feed itself; it lives in symbiosis with a unicellular photosynthetic organism called zooxanthellae. This unicellular organism settles in the tissue of jellyfishes. It provides products of photosynthesis to the jellyfish, and in return, the jellyfish provides it minerals and nutrients from the soil and the seawater. In addition to this symbiosis, the spotted jelly has several smallmouths used to grab animal plankton. These mouths are disposed all along its oral arms.

Aurelia aurita (also called the common jellyfish, moon jellyfish, moon jelly, or saucer jelly) is a species of the genus, Aurelia. The jellyfish is translucent, usually about 25–40 cm (10–16 in) in diameter, and can be recognized by its four horseshoe-shaped gonads, easily seen through the top of the bell. It feeds by collecting medusae, plankton, and mollusks with its tentacles, and bringing them into its body for digestion. It is capable of only limited motion, and drifts with the current, even when swimming. 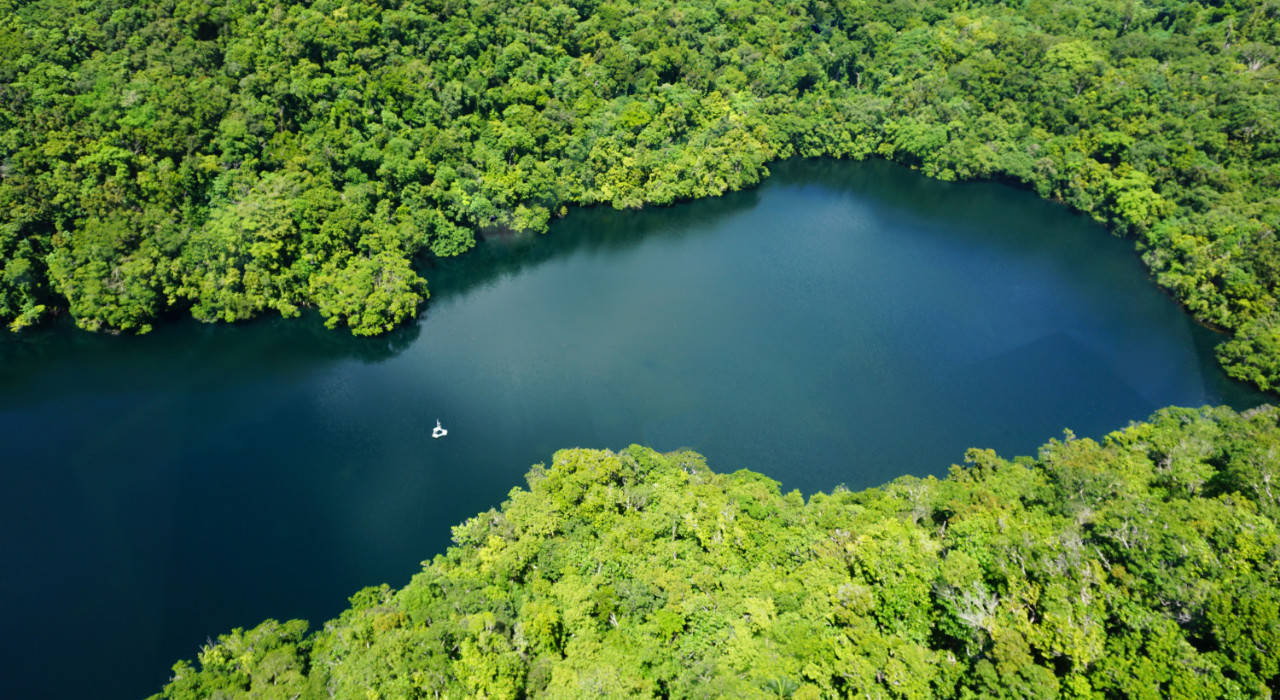 Change of Jellyfish Population and their Return

El Niño affected Palau with a severe drought in 1998 and 2015-2016 causing the water temperature in Jellyfish Lake to rise drastically causing the Jellyfish to disappear from the lake.

From counts that were done recently the number of Jellyfish reached one million and is still growing.

Tourists are enjoying visiting the unique lake and snorkeling with the non-stinging Jellyfish.