As already mentioned in an earlier post, the three dive sites which are a must for every diver traveling to Micronesia’s Palau are Blue Corner Palau a fantastic drop-off and wall dive, Ulong Channel Palau an amazing shark and most enjoyable coral dive and of course German Channel Palau. Check out Youtube and online reviews to learn more about these great dive sites.

German Channel Palau is a dive site suitable for all divers and ages and a wonderful opportunity for underwater photographers to get high-end pictures and footage of Manta Rays. 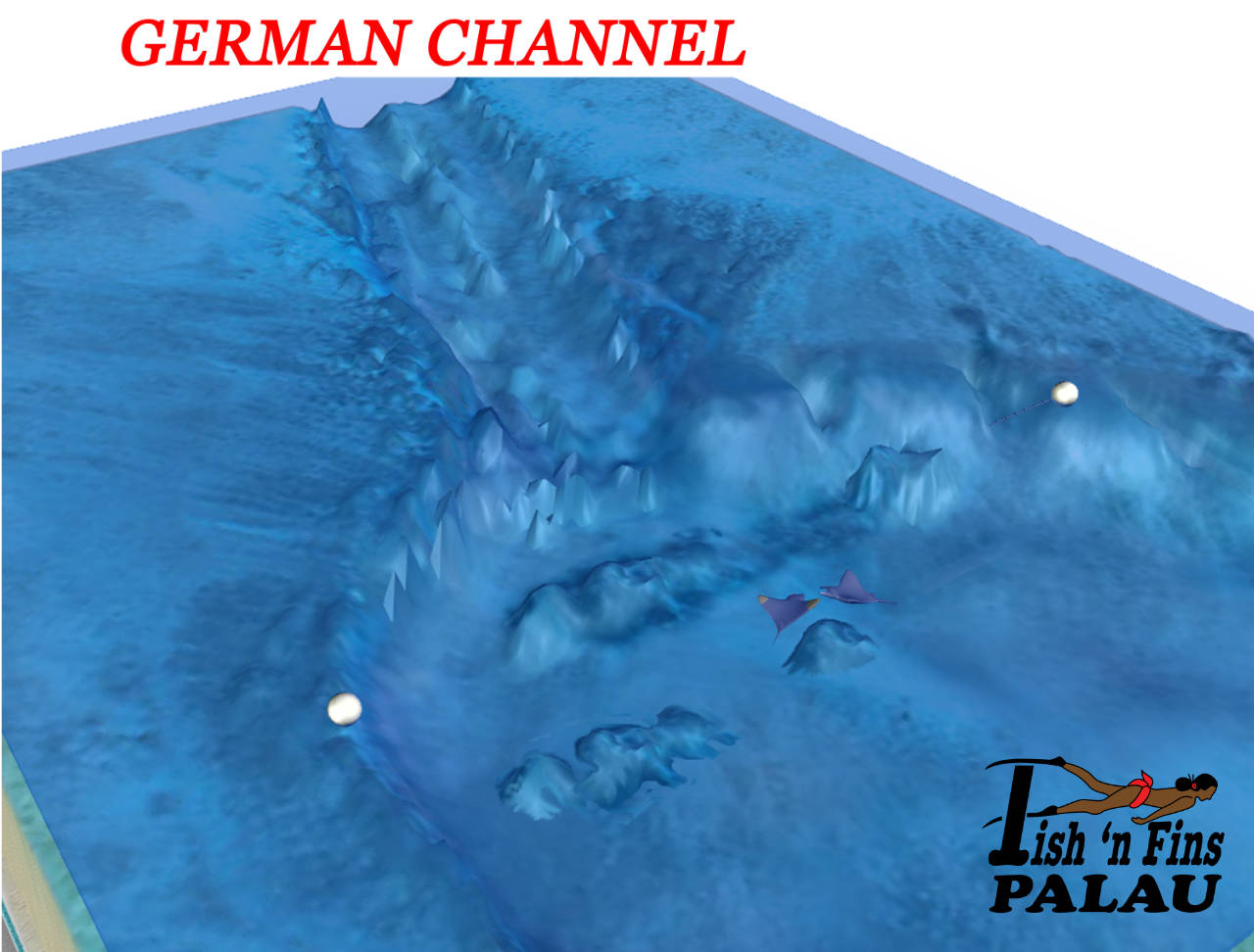 My last dive at German Channel was from our liveaboard the Ocean Hunter Palau - but of course, we also offer this great dive with our land-based hotel-dive packages - to get the right fit for your Palau diving adventure you should check our Best Price Dive Packages Palau.

I enjoyed this dive tremendously - I’ve been to the Maldives and 9 years in Yap and have seen my fair share of big rays - but the manta dive at German Channel tops it all.

The way we did the dive was to first have a look at two cleaning stations, where manta rays and sharks get regularly cleaned and we didn’t have to wait long - two mantas and some grey reef sharks were at the station getting serviced by small cleaner wrasses. Mantas in slow motion - hovering on top of the service station taking off and returning in a circular motion after flying slowly over our heads posing for our guests to get close-up underwater photos and videos.

From the cleaning station our dive guide and captain of the Ocean Hunter, Kenneth took us along the reef, which is amazing by itself - lots of fish, sharks, and lovely sea fans - further into and finally mid-channel, where we witnessed the most amazing manta action ever. Lots of mantas, feeding, looping, making the train - manta diving at its very best.

Our in-house photo and video PRO Udi has made the following amazing video  - this video will give you an idea of how great scuba diving at German Channel can be :-)

To give you more insight into German Channel we’d like to share the following great dive site description with you - it’s an excerpt of the book “Palau Diving & Snorkeling Guide”, written by Fish ’n Fins directors Navot & Tova Bornovski and available at Fish ’n Fins Boutique or at Trade Shows if you are fast enough to get one.

It is believed that famous seafarer Ferdinand Magellan “sailed by Palau” in 1522. The conscious discovery of Palau happened in 1697 after a group of Palauans shipwrecked on the Philippine island of Samar.

The Czech missionary Paul Klein met the group of sailors and was able to draw the first map of Palau based on the descriptions of the shipwrecked. He reported his finding to his superior, which led to the discovery of Palau.

In the late 19th century possessions of the islands were claimed by Spain, England, and Imperial Germany.

In 1885, the matter was brought to Pope Leo 13th for a decision. The Pope recognized the Spanish claim but granted economic concessions to Britain and Germany. Palau then became part of the Spanish East Indies along with the Mariana, Marshall, and the rest of the Caroline Islands - all administered from the Philippines.

After their defeat in 1898 in the Spanish-American War, the Spanish lost possession of the Philippine Islands. Spain sold the Palau archipelago to Imperial Germany in the 1899 German-Spanish Treaty.

In 1905, Germany discovered that’s the southern island of Angaur was very rich in guano, the excrement of seabirds and bats, used as a fertilizer due to its phosphate content.

In order to bring the guano to Koror, for trans-shipment to Europe, a channel had to be excavated. The Germans blasted and dredged a channel through the barrier reef between Ngemelis and Ngercheu. Today only speedboats and shallow draft vessels can transit the shallow channel 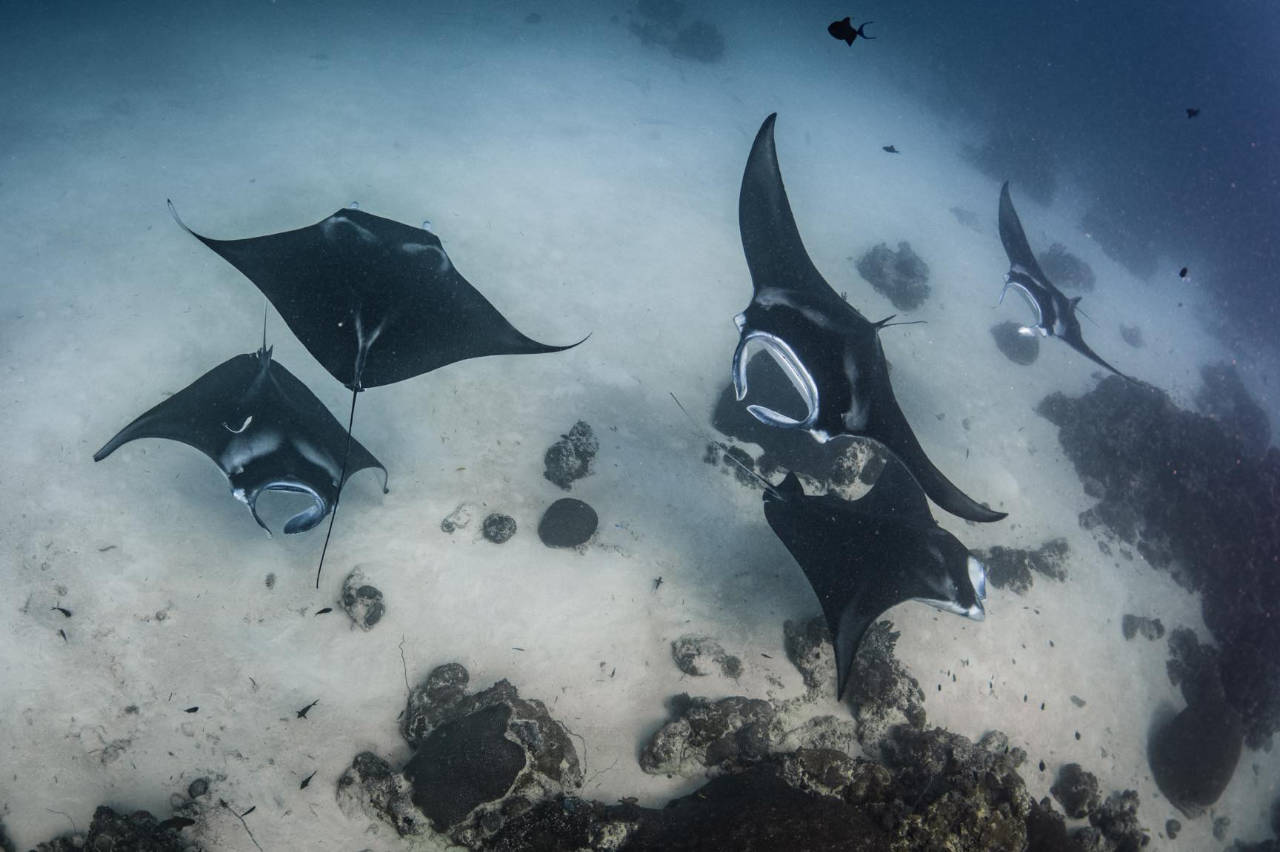 Another great video of German Channel by our guest Sigala Shoham - enjoy!

German Channel is located East of Ngemelis Island, roughly 23 miles (37 kilometers) southwest of Koror, 40-50 minutes by speedboat. During the boat ride, you will be able to enjoy stunning views of the Rock Islands. We usually combine a double tank at German Channel and Big Drop-off with a tour to Jellyfish Lake :-)

Any scuba diver from Novice to Advanced. 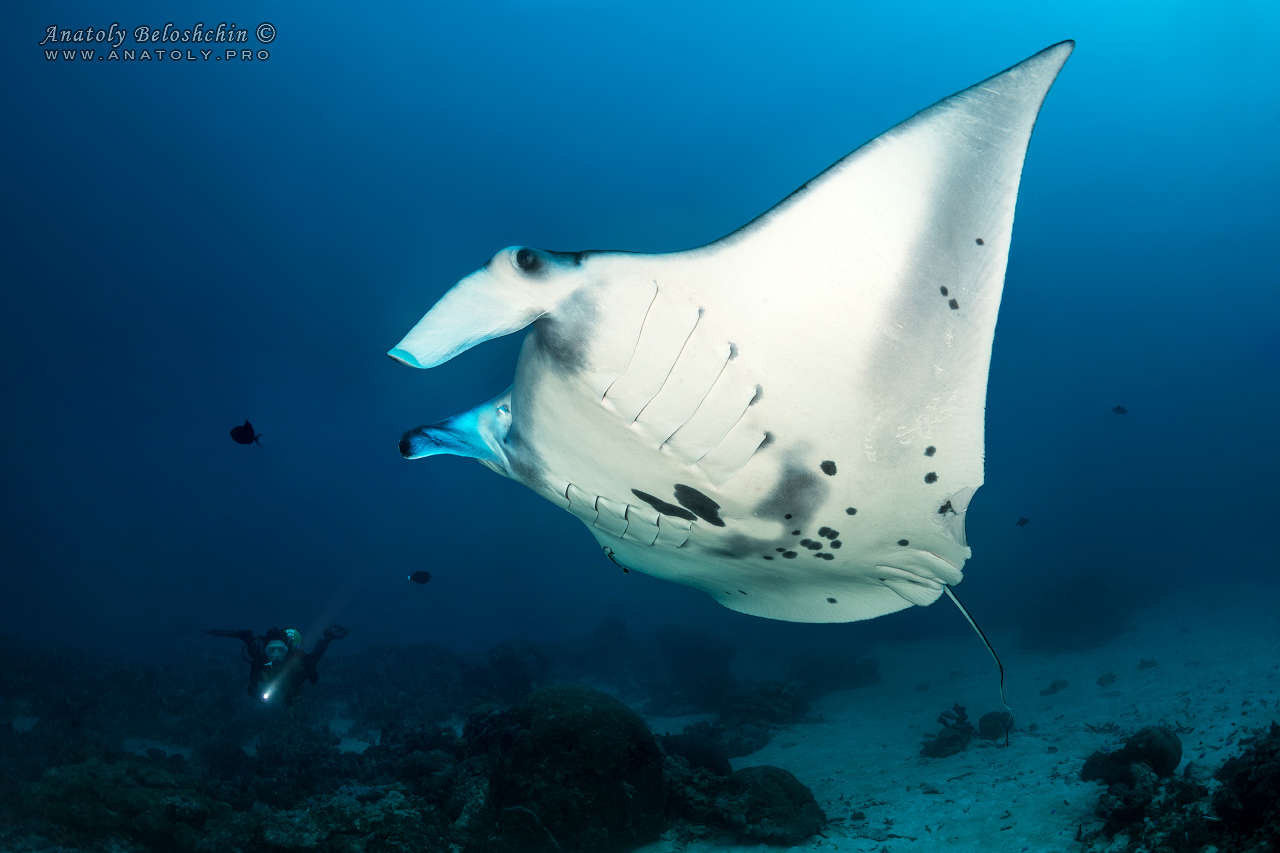 German Channel runs from Northeast to Southwest. The cut through the western barrier reef between Ngemelis Island and the shallow reef that stretches north of Ngercheu Island (Carp Island) was done during the German occupation (1899 to 1914) of the islands. The channel connects the inner lagoon with the open ocean. The open ocean floor, between the two islands, rises sharply from 1000' (330 m) to 120 feet (40 m) and then gradually to 30 feet (10 meters). The northern and eastern slopes that border the diving areas are covered with a large variety of hard corals. The mouth of the channel has a sandy bottom spotted with numerous coral heads and coral formations.

German Channel is known for Manta Rays, schooling sharks, and an abundance of tropical fish. Almost every form of marine life can be seen here. Thousands of jacks will school here along with barracudas, trevally, and snappers of numerous species. The sandy bottom is home to garden eels, blind Gobies, and Mantis shrimps, to name but a few. During the incoming tide, Manta Rays can often be seen inside the shallow channel. In the late afternoon, the Manta's can usually be found feeding on plankton and krill at the mouth of the channel. Reef sharks are also known to come to the cleaning station at the mouth of the channel. It is the lucky diver that gets to see a shark standing vertically with its head thrown back while cleaner wrasse and butterflyfish hurry to clean its body. Sighting cuttlefish is another reward for the observant diver. Important Note: Mantas will approach a cleaning station a couple of times before they hover over the station. At this time the cleaner wrasses and the butterflyfish do their job. If divers chase the Mantas, the Mantas will leave and not come back!!! Be very patient, let them come and go; eventually, you will get the photo opportunity of your life. Remember, patience is the name of this game. Keep a distance from the station and let them come to you. The rewards are worth the wait.

Follow us on a virtual scuba dive of German Channel Palau

Two moorings mark the north and south border of the diving area. Your dive guide will decide where to start the dive according to the current, weather conditions and other boats in the vicinity. The dive usually starts from the southern buoy. On the descent, you will see the shallow reef to one side and a steep slope on the other side. Follow the slope down about 50 feet (17 meters), keeping the reef to your right. Soon the slope will turn into a very wide sandy plateau. At 60 feet (20 meters) there is a cluster of large rocks. This is a cleaning station. Swim 15-20 feet away toward the shallows and wait for the Mantas or sharks. While waiting, look around, if you see large craters in the sand or between small rocks, you could be in a nesting area of the Triton Triggerfish. Triton triggerfish are probably the most aggressive fish in the ocean.

When nesting Triton will attack any fish or scuba diver that unknowingly enters the nesting area. Looking down at the sand you can also see blind shrimp lodging together with the Brown Gobi. Watch carefully and you will see how these two (2) fish work together for mutual benefit. Upon leaving the area to swim to the coral heads and follow them along the sandy bottom. At this point, you will start to sense the German Channel experience as you are surrounded by schools of fish and patrolling sharks. A wonderful sight!!!!! Continue along the bottom at 30 to 40 feet (10 to 13 meters) until you reach the slope on the other side (northern buoy). If the current is strong do not fight it; let it carry you toward the lagoon. You will, literally, fly over patches of lettuce corals and Giant Tridacna Clams. Before you surface, listen carefully for the sound of approaching boats. Use a safety sausage to alert boat drivers to your location in the water. Night Diving: German channel is one of the best areas for night diving. Both moorings offer excellent vantage points to see night critters. CAUTION: German Channel is a major passage to the southern dive sites. Dozens of speeding boats cross this narrow pass daily. Be extremely cautious while ascending to the surface, always mark your spot with a safety sausage during the safety stop.